Rhodolite is a beautiful and affordable gemstone that’s much sought after due to its stunning appearance. It’s often confused with other red gemstones that look similar but are far more expensive. It’s a popular choice among those who want an expensive looking gemstone at a much lower price.

If you’re looking to add a rhodolite gemstone or jewelry piece to your collection, we’ve got all the information you need. In this article, we’ll take a closer look at the origin of this stunning gemstone and how to take care of it. We’ve also included some unique rhodolite jewelry designs for you to check out.

The most valuable member of the garnet family, rhodolite is pyrope-alamandine stone that’s believed to have originated in North Carolina, U.S.A. First discovered by mineralogist William Hidden back in the 1890 in the Cowee Valley, NC, the gemstone was later found in several other countries including Norway, Mozambique, Kenya, Greenland as well as other U.S. states. Today, the most important rhodolite sources are Tanzania, India, Zimbabwe and Sri Lanka.

While the rhodolite gemstone was named after the pinkish-red rhododendron flower native to the state of North Carolina, it’s actually derived from the Greek word ‘rhodon’, meaning ‘rose’, which is a reference to its beautiful, rosy color.

Rhodolite gemstones come in a wide range of colors and shade from pink to a purple/violet red. For years, it’s been highly popular in the jewelry industry because of its affordability and it’s also an excellent alternative to the more expensive gemstones that are similar in appearance.

When evaluating the quality of a rhodolite gemstone, it’s important to take the following quality factors into consideration: the color, cut, carat and clarity of the stone. Let’s look into each of these in more detail.

Rhodolite is famous for its beauty, vibrant and natural colors and is usually found in different shades from light pink to lavender. However, not all rhodolites are valued the same way. The most desirable color of rhodolite is raspberry-red and stones of this color are usually more highly priced than the other colors.

Because of its durability, rhodolite is an easy to stone to cut into different shapes and sizes. Some of the most common shapes include ovals, trillions, emeralds and cushions but these are just a few of many. Cabochon-cut rhodolite is fairly common and the stone is also faceted in order to enhance its shine and brilliance. 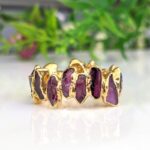 When cutting rhodolite, jewelers try to retain as much of the stone’s weight as possible from the rough, to avoid wastage. Due to this reason, you may come across rhodolite cut in unique shapes that are quite different from the common cuts.

One of the most important quality factors to consider when evaluating rhodolite is the clarity of the stone. In gemology, clarity refers to the imperfections (or inclusions) in a stone, which can reduce its overall value. The more inclusions it has, the more its value will decrease.

High quality rhodolite gemstones don’t usually have any inclusions visible to the naked eye, but they may have tiny inclusions inside the stone. They’re also more brilliant and lustrous in comparison to the lower quality stones.

Most gemstones are often treated or enhanced in some way in order to improve their brilliance, shine and color. However, this is not the case with rhodolite. In fact, in the late 1990s, jewelers tried experimenting with the stone, treating it with heat. However, the experiment was a failure as the stones changed color and became an ugly brownish-red or orange.

A metallic coating formed around some of the stones, spoiling their appearance. No attempt was made to treat or enhance rhodolite gemstones again and they continued to be used in their natural state.

Difference between Rhodolite and Other Red Gemstones

Rhodolite is often confused with other red gemstones that are far more expensive (like the ruby or tourmalines). However, the difference can be easily noticed when looking at the base of the stones’ color.

Stones like pink tourmaline and rubellite exhibit vivid, saturated pink and red tones regardless of how dark or light their shade may be. Rhodolites, on the other hand, have a duskier or more blush pink base tone.

Some stones, such as red and pink tourmalines usually exhibit pleochroism which can be easily seen, but this isn’t common in rhodolites. Pleochroic gems usually show two or more colors when they’re viewed from various angles, something that’s never seen in rhodolite gemstones. Rhodolite, on the other hand, has rutile silk within it that’s not seen in tourmalines.

Rhodolite is a highly popular gemstone for jewelry because of its gorgeous appearance and durability. There are various types of attractive rhodolite jewelry designs available on the market, from minimal to extravagant. Let’s take a look at some of these designs. 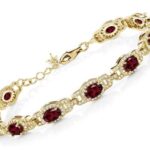 A highly versatile gemstone, rhodolite makes for all kinds of stunning jewelry, including bracelets, pendants, necklaces, rings and earrings. Because of the gemstone’s lovely, reddish color, it looks best with metallic or white metals. Together, the colors give the piece a chic, modern look. 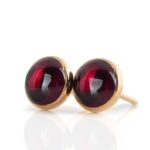 If you’re looking for a classic, vintage piece, a simple pair of rhodolite stones set in rose or yellow gold would be a perfect choice. You can find them in various cuts and styles including cabochons, emerald cut and faceted stones or you can even opt for a pair with natural rough rhodolite which would look quite unique. 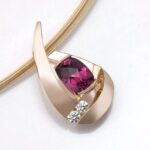 If you’re more into eye-catching, unique jewelry pieces that look classy and elegant, you can always opt for a beautiful rhodolite pendant like this one.  However, if you’re looking for something more minimalist, you can choose a simple necklace and pendant instead without too many embellishments. 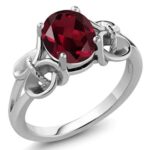 Over the years, rhodolite has become quite popular for engagement rings, mainly because of its durability. While it’s a lot harder than most other gemstones, it does need a little more care and maintenance than stones like rubies or diamonds, which are common choices for engagement rings.

However, if you’re committed to taking care of your rhodolite engagement ring and if you select a protective setting for it, like a halo or bezel setting, then this gemstone can be an excellent choice.

Rhodolite (also called the stone of inspiration), is believed to bring inspiration of love to its wearer through the heart and mind. It encourages kindness, love and compassion and is also said to promote the wearer’s spiritual growth and self-worth.

A popular stone used in crystal healing, rhodolite is also said to be useful in the treatment of certain disorders of the lungs and heart, while also stimulating metabolism. Many crystal healers use this gemstone for these purposes as well as to relieve blood disorders and boost blood circulation. 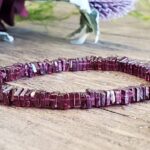 Some people believe that rhodolite has the power to make its wearer smarter by organizing the information in their mind, clearing the mind and making it easier to focus. It’s believed to attract happiness into the wearer’s life and is also used to purify and re-energize the wearer’s chakras.

Centuries ago, rhodolite gemstones were worn as protective talismans that were believed to protect the wearer from harm and injury. Even today, many people around the world regard it as a protective stone and wear it as amulets or talismans to keep themselves safe.

Rhodolite has a hardness of 7 – 7.5 on Mohs hardness scale which means that it’s fairly durable and with a little extra care and maintenance, it’s likely to last for a lifetime. Here are some tips on how to take care of your rhodolite gemstone or jewelry:

Where to Buy Rhodolite Jewelry?

If you’re interested in buying your rhodolite jewelry online, we recommend the following online platforms: Etsy and Amazon. Etsy is famous for unique, hand-made products and offers a range of rhodolite jewelry.

Amazon, known as the world’s largest online marketplace, also has an extensive range of gorgeous rhodolite gemstones as well as jewelry at various prices.

When shopping for rhodolite jewelry online, communicate clearly with the retailer and be sure to check out the product images and policies carefully. You can also go through the reviews section to get an idea about the product and customer service.

Let’s take a quick look at some of the most frequently asked questions about rhodolite gemstones:

While rhodolite gemstones are found in abundance in many countries, fine quality rhodolite with medium tone and medium-high saturation are very rare and highly priced. These rare stones have a strong pinkish-red color which is called ‘spirit color’ by miners since it looks similar to gasoline.

Rhodolite is much less expensive than the rest of the rare garnets and high quality stones can be found for about $150 to $350 per carat.

The easiest way to identify a fake rhodolite is by looking at its color. Genuine rhodolite gemstones have a lovely, pinkish-raspberry color that’s unique and not seen in other pink or red gemstones. If you’re unable to tell the difference from the color, you can check to see if the stone is magnetic. Rhodolite has a high manganese and iron content, meaning that it’s magnetic, so you can use a neodymium magnet to check if it’s genuine or fake. If the stone sticks to the magnet, it’s a genuine rhodolite.

Spirit colored rhodolite is extremely valuable due to its rarity and high quality. Gemstones that exhibit more pink and purple are considered to be more valuable. A 10-carat bright purple rhodolite can cost up to $2000 per carat, since stones of this color are the most expensive.

Rhodolite ranks at 7-7.5 on Mohs’ scale of hardness which means that it’s a durable gemstone and can be used for various types of jewelry.

Valued and used by various cultures for its mystical properties and stunning appearance, rhodolite is a beautiful gemstone that would make a great addition to any jewelry collection. A simple piece of rhodolite jewelry is an excellent way to spice up even the simplest of outfits and the best part is, it won’t burn a hole in your wallet.