Let’s take a look at mother of pearl vs. pearl.

Both pearls and mother of pearl are created from nacre, the iridescent substance that an oyster or mollusc secretes made of calcium carbonate. As a result, they’re both known as organic gemstones. The difference, however, is in where the material forms. 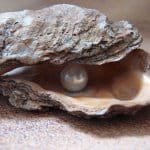 Pearls are formed inside the mollusc, often within its body tissue. When an irritant finds its way into the soft tissue, the creature then coats the irritant (or nucleus) with layer upon layer of nacre, which over time builds up a spherical pearl.

Mother of pearl, on the other hand, is a thin layer formed on the inner lining of the oyster’s shell. It’s the iridescent surface you see on the inside of most mollusc shells that gleams in different colors. The lining protects the shellfish from irritants that can get inside the shell and keeps it comfortable.

Pearls have always held great value, especially before the advent of cultured pearls when natural pearls were rare and not accessible to the masses.

Mother of pearl has never held the same value, because it’s easier to find than pearls. Although prices have been increasing of late, pearls still remain the more valuable of the two. 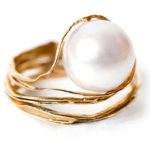 Pearls are more valuable than mother of pearl. See this ring here.

To put the rarity of the two in perspective, consider that every mollusc that produces nacre will have mother of pearl in its inner shell lining, whereas very few will naturally produce a pearl.

Pearls are almost always spherical but can sometimes grow into unique and strange shapes, as seen with keshi pearls. Typically, when jewelers work with pearls, they can get creative with the setting but not so much with the pearl itself, due to its round shape. However, with the rise in interest of baroque pearls, there are more interesting pearl shapes to work with now. 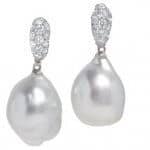 Mother of pearl is a flat surface and doesn’t have a shape. You could say it’s the shape of the shell. Because of this, mother of pearl has applications that pearl doesn’t have, such as being used for watch faces, buttons, doorknobs, picture frames and other decorative items.

Pearls are viewed as a precious gemstone and are primarily used in jewelry, as in rings, necklaces, bracelets, earrings and pendants. Pearls are typically drilled like beads and strung together into strands. Traditionally, they have had a classic style and wearing pearls oozed sophistication. 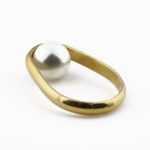 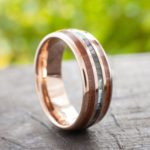 Pearls have been referenced in some of history’s greatest stories, such as the story of Cleopatra’s pearls as told by Pliny the Elder. Pearls can be traced back to thousands of years and even today, antique pearl jewelry can cost a fortune.

Mother of pearl has an equally long history, but it isn’t revered in the same way that pearls are. Again, this is probably because it’s more abundant than pearls.

So there you have the top 5 differences between mother of pearl vs. pearl. Although they’re made of the same stuff, they couldn’t be more different. And just because it’s called mother doesn’t mean it’s superior or better.

12 Black Pearl Necklaces to Wow You