Home » GEMSTONES » What Is Vesuvianite? – A Buying Guide

What Is Vesuvianite? – A Buying Guide

Vesuvianite is one of those gemstones we rarely hear about and can rarely find in mainstream jewelry stores. From beautiful jewelry to ornamental items as well as for those who believe in the metaphysical properties of crystals, vesuvianite has many applications.

If you haven’t heard of vesuvianite before, we’ve got you covered. In this buying guide, we cover all the main points about vesuvianite and how to add the gemstone to your collection.

Origins and Locations of Vesuvianite

Probably the easiest thing to deduce about vesuvianite is its origin – Italy, near Mount Vesuvius which is how it’s got its name. However, vesuvianite has been known by many names:

Originally named in 1795 by Abraham Gottlob Werner, the crystal used to be called “Hyacinthus dictus octodecahedricus” by Moritz Anton Kappeler in 1723. It was later renamed to “hyacinte du Vesuve” by Jean-Baptiste Louis Romé de L’Isle in 1772 which is how Werner likely got inspired to name the crystal vesuvianite. The naming game didn’t stop there, however, as in 1799, Rene Just Haüy reintroduced the name “idocrase” – the old Greek name the crystal used to bear as it means “mixed form” and is a reference to how vesuvianite’s crystals often combine the forms of other minerals. 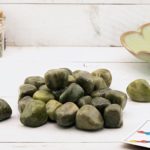 But what exactly is the chemical composition of vesuvianite?

Vesuvianite is a silicate mineral that is found in tetragonal crystals. It’s most commonly found in skam deposits and limestones that have gone through metamorphism.

Vesuvianite has a specific gravity of 3.4 and a very low hardness of just 6.5 on the Mohs scale. Depending on its geographical location, vesuvianite can have a lot of different inclusions in it.

The vesuvianite mined from Franklin New Jersey, for example, is known as cyprine because of its sky-blue color that’s caused by copper impurities in the crystal.

Californite is another common name for a sub-type of vesuvianite that has a lot of jade-like features. It’s also often called California jade, American jade or Vesuvianite jade.

Another manganese-rich variety of vesuvianite is called Xanthite, while a vesuvianite called Wiluite is an optically positive variety that’s mined from Wilui, Siberia.

Idocrase is the variety of vesuvianite that has gemstone-quality transparency and can be used in jewelry.

Depending on all these factors, impurities, and varieties, vesuvianite can come in a myriad of different colors – it can be green, blue, brown, yellow, pink, orange, purple, as well as maroon or red. There are even multicolored pieces of vesuvianite with shades of green plus pink or purple, but those are rare.

How To Evaluate Vesuvianite Quality 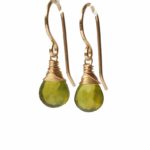 The green jade-like variations of vesuvianite are usually the most highly priced ones, especially when they have decent clarity and transparency. A good vitreous luster can be achieved in most vesuvianite stones with a good polish too.

The main problem most vesuvianite pieces face are the numerous inclusions they often have as well as the fact that they are often outright opaque in their transparency. Such crystals are usually used for ornamental purposes and rarely make it to the jewelry sphere. 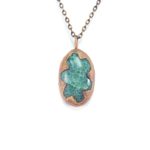 Blue varieties of vesuvianite are also highly valued, again – when they have good clarity and transparency.

Green and crystal clear vesuvianite gemstones are often offered as jade imitations, sometimes disingenuously, so bear this in mind when you’re buying jade, which is more expensive.

Although high quality vesuvianite is a very beautiful gemstone, it’s not commonly used in jewelry and you’ll notice that there are limited options on the market.

More opaque and common vesuvianite gemstones, however, are usually just cut into beads and cabochons and are used in affordable artisan jewelry.

Green varieties are usually preferred for their earthy feel and can make for some beautiful earrings, rings, necklaces and bracelets.

The price of vesuvianite varies greatly based on its quality – aesthetically pleasing and clear vesuvianite like this cluster from the Jeffery’s mine in Quebec can go in the hundreds of dollars while plain and opaque tumbled stones like these ones can be priced in the single digits.

Outside of jewelry, vesuvianite is often used for simple ornamental pieces such as balls, pyramids, tumbled stones and cubes. It’s also often sold as plain rough for people who just want a large chunk of vesuvianite for its spiritual powers.

As we’ve seen above, vesuvianite neither rare nor highly valued as a particularly precious gemstone. The only vesuvianite pieces that get to highly priced and catch the attention of professional jewelry cutters are the truly rare and spectacular transparent and crystal clear vesuvianite stones. These, of course, are harder to come by.

How To Care For Vesuvianite

With a hardness of just 6.5 on the Mohs scale, vesuvianite is not very hard. It can be easily scratched from other gemstones and metals so it’s best to set it in a protective setting. It’s also important not to wear vesuvianite when you’re engaging in physical activities such as sports as it can be easily damaged.

When cleaning vesuvianite use warm soapy water with mild detergents and never use strong chemicals as they can damage the stone.

Vesuvianite is thought to be a strong heart stone that has powerful metaphysical properties. It’s said to help the wearer embrace their desires and reach their higher self by feeling the true yearnings of their heart.

It’s also a zodiac stone for Sagittarius and Capricorn and is often used in birthstone jewelry. Vesuvianite is believed to have a powerful vibration that helps override the ego of the wearer and aid in his or her spiritual growth.

Where to Find Vesuvianite Jewelry

It’s not likely that you’ll come across vesuvianite at your local store. If you’d like to add vesuvianite to your gemstone collection, taking your search online will give you a range of options and prices to choose from.

We recommend starting your search on Etsy as these the platform bring together the products of a host of creative designers and retailers onto one place for easy comparison.