Home » GEMSTONES » What is Marcasite Jewelry? – A Quick Guide

What is Marcasite Jewelry? – A Quick Guide

Let’s take a look at marcasite gemstone, the confusion with pyrite and marcasite jewelry then and now.

History of Marcasite Gemstone and Jewelry 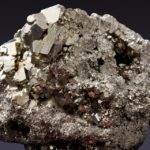 Marcasite was called “The gemstone of the Incas” and people also used it round plates and mirrors as well as jewelry. Such mirrors are believed to have been used for ritual sun-worship and as ritual means for seeing into the future.

It was during the 18th and the 19th centuries, however, when marcasite jewelry entered its “Golden age” in Europe. In the Victorian Era marcasite jewelry was made famous by Queen Victoria who wore it as a substitute of the much more expensive diamond jewelry.

And since most people couldn’t afford diamond jewelry either, marcasite quickly became popular throughout the masses.

What Is Marcasite Jewelry?

Marcasite jewelry is any jewelry piece made out of the brittle, brassy colored metallic stone called pyrite, a.k.a Fool’s Gold (more on this confusion between marcasite and pyrite below). Marcasite itself is a granular stone with relatively low hardness (6 to 6.5 on the Mohs scale) and a very distinct cleavage. That, together with its brittle nature makes it quite unsuitable for most jewelry purposes. 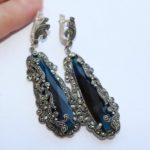 Notice the marcasite work in these earrings. See them here.

As a result, most marcasite jewelry actually contains pyrite.

Pyrite is a gemstone that’s very similar in appearance to gold but can also be darker and metallic looking like the marcasite gemstone. When small pieces are set into silver jewelry, you get the famous marcasite jewelry style.

So why is this called marcasite jewelry if it’s actually made out of pyrite?

Pyrite, often called “Fool’s gold” is very similar to marcasite in its appearance and several other physical properties. It can be either a dimorph or a polymorph of marcasite as both of these minerals share the same chemistry.

However, pyrite and marcasite have different crystal habits which means that pyrite is much more stable for jewelry use.

In most marcasite jewelry, both in the past and today, pyrite is actually the main component rather than marcasite itself. Marcasite can still be a part of the compound but the more prominent pyrite is, the more durable and of higher quality the entire piece will be.

So, why is marcasite jewelry called that if marcasite isn’t the desirable mineral? Why isn’t it called pyrite jewelry?

The simple reason is that pyrite was actually called marcasite for quite some time. Up to the 19th century, both materials were viewed as one and the same. In fact, the name “marcasite” comes from the Arabic word marqashītā which means pyrite.

During the Victorian Era, it was the romantic Art Nouveau designers of the early 19th century that first popularized marcasite jewelry but they were soon followed by the Art Deco designers who began producing pieces inspired by elements of nature such as butterflies, leaves, flowers, and others.

The Art Deco style quickly became extremely popular for its beauty and effectiveness and is one of the most well-known jewelry styles to this day. 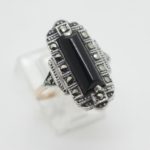 The marcasite jewelry of the 1920s is the second most popular style for this jewelry type. The 1920s saw newer marcasite jewelry designs started going far and beyond nature-themed motifs and began to explore shapes, geometric forms and designs.

Large gemstones were used as centerpieces of stylish, angular designs, with marcasite used to accent the design. 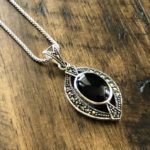 Regardless of how common, inexpensive, and imperfect the pyrite and marcasite materials are, it’s the beautiful style and designs of marcasite jewelry that makes it so popular.

Marcasite is commonly set in silver or white-hued metals, as the contrast in color is very attractive.

Pyrite jewelry holds a vintage charm and is especially ideal for those who love vintage jewelry. You can find many genuine antique pieces featuring marcasite jewelry on the market today. Jewelers also create modern replicas, bringing the old Victorian Era Art Nouveau and Art Deco styles back to life.

As the materials that go into the making of marcasite jewelry are inexpensive, the value of each individual piece is determined by its design, size, designer’s brand, and possible additional components such as semi-precious or precious gemstones included in the jewelry design.

A simple marcasite jewelry necklace or an earrings set on Etsy.com can be quite affordable, however, and will rarely go into the 3-digit price range.

How To Clean Marcasite Jewelry

When taking care of marcasite jewelry, you have to take two things into the consideration – the moderately soft and brittle nature of pyrite and the potential presence of other materials such as soft gemstones or silver.

As far as the pyrite itself is concerned, the cleaning should be done with a soft and damp piece of cloth, usually wet with warm soapy water. Excessive brushing or scratching is a bad idea as the brittle pyrite (or the even more brittle marcasite) can be easily damaged. Powerful and toxic domestic detergents are also ill-advised for the same reason.

If the marcasite jewelry piece includes a lot of silver, as is often the case, or if it has a large, soft semi-precious gemstone as its centerpiece, then take extra care to preserve the gemstone. Generally speaking, don’t soak or strongly brush marcasite jewelry, instead clean it gently and with a lot of care.

Where to Buy Marcasite Jewelry