A Guide to Georgian Jewelry

If you’ve set your heart on antique jewelry, you might be considering the Georgian era, considered the backbone of the world’s most unique jewelry pieces.

The Georgian era is the oldest of the eras for popular antique jewelry and finding authentic Georgian pieces can prove very difficult. If you want to invest in antiques or simply find a Georgian inspired piece of jewelry, keep on reading.

We cover everything you need to know about jewelry from the Georgian era.

Georgian jewelry was rich in variety and style. People wore jewelry for various purposes and a large range of gemstones and metals were used. 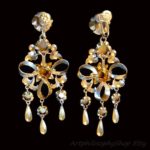 Resembling candelabra in shape and structure, girandole earrings have elaborate designs, typically with a large gemstone surrounded by more dangling ornaments. Georgian women wore these earrings for both daytime and evening occasions.

These extravagant earrings were heavy and uncomfortable. When the fashion waned, girandole earrings were disassembled, and redesigned to create pendants, brooches, and smaller earrings. The most popular earrings in the early Georgian era was girandole but later replaced by pendeloque. 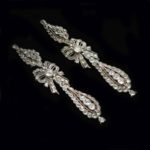 These were pear-shaped dangling earrings decorated with various stones and pearls. Compared to girandole earrings, pendeloque earrings were elongated and lighter. Originally, these earrings were designed with a hinged wire hook, but later replaced with a clip-in lock. 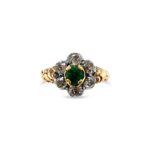 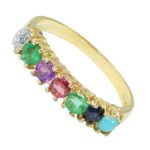 In the Georgian era, rings were typically designed with a central gemstone surrounded by smaller gemstones. Bands of full gemstones were stacked up on fingers, while some elaborate rings were worn alone. Georgian rings featured some Grecian inspired motifs like flowers, doves, scrolls, and acorns.

Acrostic rings were also used as tokens of loving sentiments such as “adore”, “regard”, “dearest”, “forever”, “love me” and such. The first letter of each gemstone corresponds to the word of sentiment. The acrostic “dearest” will set the gemstones—Diamond, Emerald, Amethyst, Ruby, Emerald, Sapphire, Topaz—in sequence. Posy rings—golden hoop rings with engraving—were given as expression of love too. 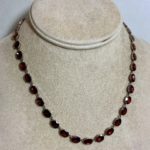 This style of necklace evolved from ribbon style chokers to rivière necklaces. These necklaces were known for their gemstones linked together, creating a beautiful gemstone chain. Rivières were designed without any ornamentation or pendant to allow the gemstones to be featured as the focal point. 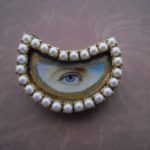 In the Georgian era, the styles of brooches evolved from “giardinetti” or gemstone bouquets to “en tremblant.” Gardinetto or giardinetti served as love tokens to be exchanged with lovers and friends. A sévigné is a type of bow-shaped brooch designed with many small diamonds. Some of the brooches in Georgian era were fitted with loops, which allowed the accessory to be used as a pendant as well. 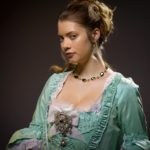 Rhinestone aigrette hair comb by Sign of the Gray Horse. See it here.

Tiaras, combs, hairpins, and bandeaus or ornamental headbands were popular in the Georgian era. While a diadem is a headband worn across the forehead, aigrette is a hair ornament designed to hold various hairstyles. Both of these styles were often seen during this time. 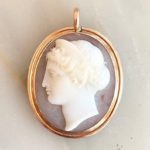 Glyptography is the art of gemstone carving, and cameo was the technique used in the Georgian era. Jewelers used agate, onyx, quartz, jasper, coral, malachite, corundum, and shell to depict a scene or portrait on jewelry. The revival of cameo jewelry accompanied a period of classical art. Some pieces of cameo jewelry featured various subjects from Roman and Greek mythology to Renaissance art and classical sculpture. 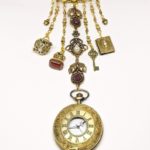 Chatelaine jewelry by Queen and Cavendish. See it here.

A chatelaine is a type of a decorative belt hook that holds various tools or accessories such as scissors, keys, watches, writing instruments, seals, corkscrews, and even thimbles. Chatelaines were made of steel and served as a purse in the Georgian era. 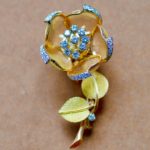 The French term “en tremblant” translates as “to tremble.” Some Georgian jewelry pieces were attached to a spring to create movement when worn. Brooches and hair clips commonly have this en tremblant design for them to catch the light and shine beautifully. 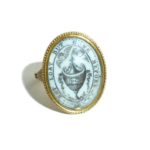 In the Georgian era, jewelry was used to preserve memories of a loved one. This included brooches with hair, memorial rings with engravings or a portrait or lockets, to name a few. 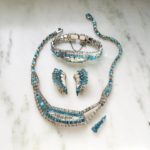 This refers to a full set of matching jewelry designed to be worn together such as earrings, necklace, bracelet, ring, and brooch. On the other hand, “demi-parure” is a less elaborate set of jewelry with two or more pieces. Some sets featured convertible jewelry pieces, for where two bracelets can be worn as a necklace, or even a brooch that can double as a necklace pendant. Parure gave us a glimpse how elaborate and extravagant Georgian era was. 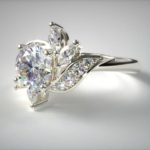 If you love antiques, Georgian jewelry can be a great addition to your collection—after all, each piece was expertly crafted, making it a handmade work of art. However, these 18th century jewelry pieces are rare outside museums, and can be very difficult to find.

Finding Georgian inspired modern jewelry is another option, spanning the modern and the old via jewelry.

What are the Characteristics of Georgian Jewelry? 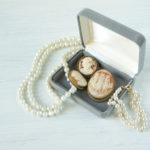 Georgian jewelry was all crafted by hand.

Unlike the Victorian era where the jewelry industry benefited from the Industrial Revolution, jewelry makers in the Georgian era had to rely on handcrafting techniques. The quality of craftsmanship of an antique piece is often a good indicator of its age—a piece of Georgian jewelry would typically have some slight irregularities, lack in symmetry and cruder stone cuts. In fact, lumpy diamonds were common—they were faceted around their original shapes as a way of avoiding waste on rough diamonds.

Many colorful gemstones were used.

Diamond, sapphire, black onyx, ruby, topaz, emerald, garnet, pearls, and coral were common in Georgian jewelry, but jewelers introduced glass paste as a less expensive alternative for real gemstones. Metal content stamping or hallmarking had not been practiced yet, so it is more difficult to identify the exact composition of metals in Georgian jewelry.

The hallmark of Georgian jewelry is its ornate metal work.

Variety of metals and alloys were used in crafting jewelry during the era, and some of them include silver, gold, and even pinchbeck—an alloy made from copper and zinc. Pinchbeck was used to resemble gold without the expense of precious metal.

The Napoleonic wars resulted supply shortage in gold and precious gems, which popularized the repoussé and cannetille metal work. Repoussé was one of the metal working techniques used, which involved hammering the metal from the opposite side to create designs and patterns. On the other hand, cannetille was more of intricate wire work, where silver and gold wires twisted into lace-like patterns.

Georgian jewelry has larger but lighter adornments. During the era, jewelers hammered precious metals into thin sheets to make larger designs while keeping them lightweight. The technique allowed them to incorporate various art influences in jewelry designs. Floral motifs and obsession with symmetry were some of the baroque influences on Georgian jewelry, while ribbon bows and geometric shapes came from Neoclassicism.

Georgian Jewelry and the Elusive Era 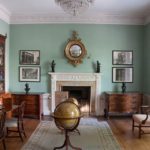 The Georgian era spanned from 1714 to 1830 and was named after four successive Hanoverian kings of England—King George I and his successors. In this era, England witnessed a period of change in fashion and culture, which had a huge impact on jewelry trends of the time.

Heirloom jewelry sets were a way to accumulate wealth in the Georgian era. Sentimental jewelry like acrostic rings, which used gemstones to convey secret messages were popular and continued into the Victorian era. There were portrait miniatures and ”lover’s eye” miniatures—eye portrait of the giver, gifted to a loved one—set in pendants, brooches, lockets, and rings.

In the early nineteenth century, eye miniatures became a type of memorial jewelry to remember loved ones, where ”lover’s eye” turned into a ”tear jewelry. ” Eye miniatures were decorated with tears to show mourning or powerful sentiment. Jewelry with locks of hair were designed to be a treasured keepsake of loved ones.

The reign of English kings established the parameters for Georgian jewelry, but that doesn’t mean the aesthetic ended there. This period was a grand and elegant era in jewelry history, and served as an inspiration to many artists, handcrafters and artisans in the industry.

Because it beecame traditional to recycle old, less fashionable pieces of jewelry by melting them to create new pieces, most jewelry stones were also lost to re-cutting, as a way of creating new styles of earrings and brooches. Because of this technique, only a few Georgian jewelry pieces survived to our modern times.