Home » GEMSTONES » Your Complete Guide to Larimar Gemstone and Jewelry

Your Complete Guide to Larimar Gemstone and Jewelry

If you haven’t heard of larimar before, you aren’t alone. Larimar, often called the Carribean gemstone, is a remarkable unique stone that resembles the blue color of the famed Carribean sea. It is quite unlike any other gemstone and is easy to distinguish.

Larimar is not a mainstream gemstone and is rare to find, but if you’re lucky enough to own larimar jewelry, you’ll know that it makes for stunning and eye-catching jewelry.

If you are looking to purchase larimar jewelry but aren’t quite sure what it is, read on for everything you need to know before you buy larimar.

Larimar is composed of pectolite, an acid silicate hydrate of calcium and sodium that is abundantly found around the world. However, although pectolite is easy to find, this blue variety of pectolite is extremely rare and is only found in one source in the Caribbean. Hence the name ‘Caribbean gemstone’. Larimar is formed in volcanic rocks. 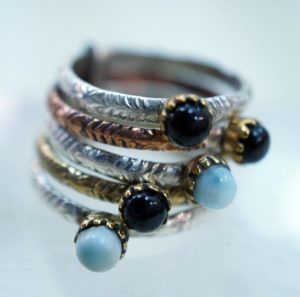 What does the word larimar mean? According to stories of its origin, larimar was first discovered in 1916 and then subsequently forgotten. It was discovered for a second time in 1974, this time by two men, a local Dominican and a visiting US Peace Corps volunteer. They named the stone after the daughter of the Dominican, Larissa, combining the words Lari and mar (Spanish for sea).

Larimar gets its coloring from the presence of copper inclusions present during the stone’s formation. It comes in a variety of blue shades, from faint to vivid volcanic blue. You will also come across greenish-blue larimar. It is rare to find solid blue larimar and almost all larimar contains some swirls of white coloring. 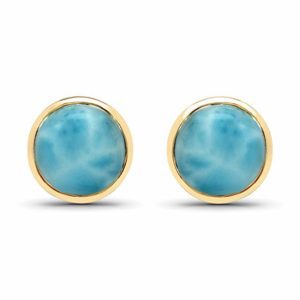 The most valuable variety is the vivid blue gemstones known as volcanic blue, which contain little whitish marbling. This is also the variety that is most in demand and can fetch high prices. In contrast, whitish larimar with very faint color are considered the least valuable.

Larimar is similar to turquoise but it is quite distinct in color and appearance so confusing it for a different stone rarely occurs.

Larimar is commonly opaque in appearance, although it is possible to find faintly translucent varieties too. The gemstone exhibits an attrative silky smooth luster.

Although larimar is a softer gemstone (4.5 to 5 Mohs rating) it is quite tough due to the structure of the inclusions within it and can be cut into a variety of shapes. Most larimar on the market is cut en cabochon to enhance and show off the stone’s silky luster and color. However, you can also find faceted stones, although this is quite rare. 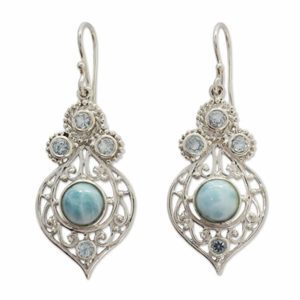 Larimar is almost always cut en cabochon as in this pair of unique vintage earrings.

Larimar is typically untreated and unenhanced. The gemstones you see on the market are often in its natural form. However, it is possible for less valuable gemstones to sometimes be dyed blue to simulate larimar. Also look out for amazonite which is less valuable and sometimes sold as larimar.

You may come across jewelry stating that they contain ‘created larimar’ but these are generally imitation, made of acrylic-based lab-created substances.

Your jeweler should disclose to you whether this is the case or not. Always check with the vendor about the authenticity of the stone prior to purchase and make sure you purchase from a trusted source.

Even though larimar is a stunningly beautiful gemstone, it is not often used in jewelry due to its scarcity and softness. It is difficult to find outside of the Caribbean and so cannot be a mainstream gemstone.

Larimar looks beautiful in all types of jewelry, especially in earrings, pendants and bracelets. It can also be used in rings, but should be placed in protective settings to ensure that it doesn’t get scratched or fractured. Some excellent setting choices for larimar include bezel, halo and inlay settings.

Larimar is typically crafted with silver, but high quality gemstones are often set into precious metals like gold. Larimar in yellow gold settings have a sophisticated and vintage vibe to them while larimar in silver settings have less color contrast and displays a more relaxed, casual look. 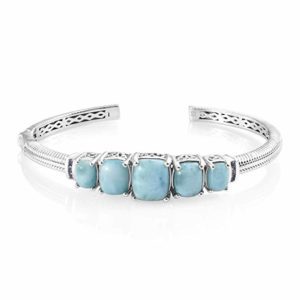 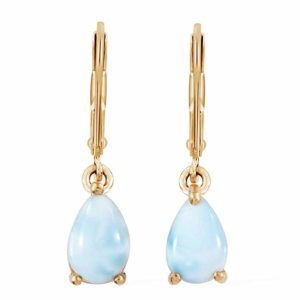 Larimar dangle earrings add a touch of vintage glamor to any outfit. See these earrings here.

While high quality larimar jewelry can command high prices, typically larimar is within most people’s budgets. You can find a piece under $50 for daily wear, while other pieces can cost over a thousand dollars. It all comes down to the quality of the gemstone and the excellence in craftsmanship of the overall piece.

Because larimar is not a common gemstone, wearing larimar jewelry is sure to make you stand out. It gives a unique look and is a step out of the ordinary.

Larimar is a softer gemstone and can easily scratch. If subject to shocks and impact, it can fracture or chip. As a result, it needs to be taken care of properly to ensure that it lasts a long time.

The best way to clean larimar jewelry is to use a mild liquid soap and warm water. Don’t use harsh or abrasive cleaners and materials as these can scratch the surface. Also, never use an ultrasonic cleaner to clean larimar.

Proper maintenance of larimar jewelry will ensure that it lasts for a long time. See this ring with stunning larimar here.

Always take larimar jewelry off when engaging in activities such as swimming, playing sports, gardening, cleaning or washing dishes and make sure that your larimar jewelry doesn’t come into contact with household detergents and chemicals, including hairspray, cosmetics or perfumes.

Avoid exposing larimar to sunlight and other strong sources of light, for long periods of time as larimar is sensitive to light and its color can fade with time due to this photosensitivity. Don’t store larimar with other jewelry as these can scratch the gemstone. Place it in a separate cloth pouch or fabric-lined jewelry box and store in a cool place, away from direct sunlight.

Larimar is a relatively new stone and so doesn’t have a lot of myths or crystal powers associated with it.

However, larimar is often called a ‘worry stone’ as it generates feelings of calm and relaxation. It is said that simply touching a larimar stone will make you feel relaxed due to its soft, silky smooth texture.

This gemstone is also connected to water due to its color and as such, is an ideal stone to control emotional issues and anxiety. Larimar is also believed to promote ease of communication, especially related to emotional concerns.

It is believed that wearing larimar jewelry is a way to promote its powers and healing ability, especially when worn as a necklace as this gemstone is thought to be connected to the throat chakra.

As already mentioned above, larimar is not a mainstream gemstone and you will rarely find it at the local jewelry store. Easily, the best place to buy larimar jewelry is in the Caribbean.

If a trip to the Caribbean doesn’t seem likely just yet, the next best place is Amazon, as there is a wide variety of larimar jewelry there to suit every budget and jewelry style.

While larimar is not an expensive gemstone, it isn’t dirt cheap, so that ring you saw for a few dollars? That’s probably a fake. Know that if the price is too good to be true, it probably is.

Do your due diligence and vet the retailer’s after sales policies (especially returns policies) and trustworthiness before you buy. Always ask about the origin and quality of the stone. And don’t pass up the opportunity of adding a stunning piece of larimar jewelry to your collection!