Home » JEWELRY FASHION » What is the Pentacle and Should I Wear It?

What is the Pentacle and Should I Wear It?

The pentacle was once a symbol of good and was believed to ward off evil spirits. Today, this ancient symbol has many different associations attached to it, some good, some not so good.

The pentacle is basically a five-pointed star set within a circle. It’s a well-proportioned, symmetrical and attractive symbol.

You might be confused over what the pentacle represents today and whether it’s a symbol you should wear.

In this article, we outline what the pentacle is and whether you should wear it or not.

What Does the Pentacle Symbolize? 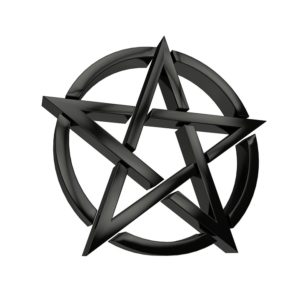 The pentacle is an ancient symbol that has been around for thousands of years. It has been used by various religions and belief groups and over time has acquired a lot of different symbolism.

In ancient times, the pentacle was seen as symbolizing the five elements of earth, air, fire, spirit and water. The circle surrounding the five-pointed star symbolized these elements working in unity together. It represents balance and harmony.

The pentacle was a popular symbol of early Christianity, used in Christian architecture, paintings, jewelry and artwork. It was used as an amulet to protect a person from evil.

The pentagon represented Jesus, with the five points standing for the five wounds of Jesus during his crucifixion.

The pentacle has associations with Taoism as well, a Chinese philosophical approach to life. Here, the five points represent the five elements of the East – wood, earth, water, fire and metal.

The pentacle is the most well-known symbol of the neo-pagan religion called Wicca.

When Did the Pentacle Get Associated with Evil?

The pentacle is a great example of how someone’s made up beliefs can affect how society views something.

In 1855, a French man by the pseudonym of Eliphas Levi, wrote a book about magic that referenced the pentacle. Levi, who was a deacon in the church, had been interested in magic all his life but when the church found out, he was excommunicated.

In his book, Levi said that an inverted pentacle (with two points pointing upwards) is a symbol of evil, the first time that the pentacle was connected to evil.

Imagine how people felt when their beloved pentacle symbol was suddenly made sinister!

From this point onwards, the pentacle began to be slowly associated with evil.

This was furthered when the Church of Satan (who don’t worship Satan by the way) used the inverted pentacle as their symbol.

After the Satanic panic of the 1990s, the pentacle was closely associated with evil and made popular appearances in media where it is commonly portrayed as a symbol of evil.

The pentagram and the pentacle are often used interchangeably but this isn’t correct. The pentagram is simply a five-pointed star drawn in one continuous line. There is no visible start or finish for where the star begins.

The pentagram is one of the oldest symbols used by humans and can be traced back to over 5000 years ago. The pentagram can be found in many regions around the world, and is a universal sign that cannot be claimed by any one country or religion.

While pentagrams may have a bad rap now, it wasn’t always like that.

So, what then is a pentacle?

When the pentagram set within a circle, it’s called a pentacle. A pentacle represents all the five elements working in harmony together. 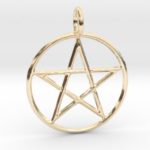 Today, for those who are drawn to the long and rich history of the pentacle, you can find pentacle jewelry such as pentacle pendants, rings, earrings and charm bracelets. The symbol is almost always depicted the right side up. 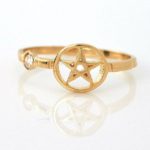 If you’re looking to buy pentacle jewelry, there are some specialist stores that sell symbolic jewelry online. However, for a broader range, you can check out Etsy or Amazon, which feature some beautiful pentacle jewelry.

Should I Wear the Pentacle?

Today, the pentacle is so closely associated with various occult religions, paganism and evil and not many people remember its other positive associations.

Wiccans often wear pentacle jewelry, but even this they may sometimes be uncomfortable to do if they don’t want to attract attention to their beliefs or to share them.

Wearing a pentacle is making a statement, whether you want to or not. Even if you are wearing it simply for fashion, you’ll still be standing out.

Is this something that bothers you?

If yes, then it’s best not to wear it. But if you really don’t care what others think, then go for it.

Before We Wrap Up…

Some people are afraid of symbols like the pentacle. It’s important to note that symbols change in meaning over time. Think of the ancient Swastika, once a symbol of peace and well-being, today associated with the horrors of the German Nazi party.

At the end of the day, a symbol on its own has no power.

Whether a hamsa hand, a nazar boncugu, a cross or a five-pointed star, it’s how we think about it and the associations that we give to it that make it a symbol worth noticing. It’s the attention we give to a symbol that gives it meaning and power.