Home » JEWELRY FASHION » Mariner’s Cross Jewelry – What Does It Mean?

Mariner’s Cross Jewelry – What Does It Mean?

Throughout history, the mariner’s cross has been an important religious symbol for the early Christians and was also adopted by the Roman Catholic Church. Regarded as a symbol of safety and steadfastness, the cross has become highly popular for jewelry.

Although mariner’s cross jewelry is worn by thousands of people around the world today, not many know about the meaning behind the anchored cross and how it came into existence. Here’s a closer look at the symbolism of the mariner’s cross and its use in jewelry.

What is the Mariner’s Cross?

The mariner’s cross, also known as the anchored cross or St. Clement’s Cross, is a stylized version of the Latin cross used in Christianity with a base shaped like an anchor.  There are several variations of the symbol, but the most commonly used form has a ring at the top of the vertical cross-bar with arrowheads on either side. The bottom of the vertical bar has two curved branches like that of an anchor.

History of the Mariner’s Cross

The mariner’s cross has its origins in early Christianity, found in ancient catacombs, when it was used to signify hope or a fresh start. According to various ancient sources, the cross was given the name mariner’s cross and St. Clement’s Cross because of the way St. Clement was martyred.

St. Clement was tied by his neck to an anchor and then thrown into the Black Sea during the reign of the Emperor Trajan. He became known as the patron saint of sailors many of whom wear the cross when to protect themselves from the dangers at sea.

The anchor became a symbol of security which was necessary for followers of Christianity during the uncertain times of the early Christian church and it was later adopted by the Jews who lived in the Seleucid Empire. 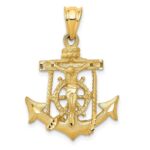 The Jews used the anchor as a symbol featured on their coinage and as a symbol, it was familiar to the Christians. In fact, the anchor is known to be one of the oldest symbols ever to be used in Christianity and in this case, it was combined with the Latin cross which represents Jesus.

Today, the anchored cross is a popular symbol worn by the United Methodist Church missionaries as a reminder that everything they do should be anchored in ‘faith, hope and love’. In Camargue, France, a symbol similar to the anchored cross was created to represent the herdsmen and fishermen of the region as well as three Christian theological virtues.

The mariner’s cross is a popular symbol used in jewelry today, with many people wearing it around the world. It’s also a commonly used design for tattoos, worn by those with strong personalities who want to express their beliefs and remain true to who they are.

What Does Mariner’s Cross Symbolize? 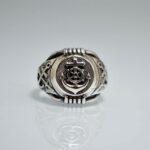 The mariner’s cross is made up of three main elements including the following:

In jewelry, the mariner’s cross can symbolize the act of moving forward from a certain point in life by setting sail on a brand new journey. Since the anchor is symbolic of two people who are in love with each other, the anchored cross also represents strong connections.

As mentioned above, there are many variations of the mariner’s cross, some more popular than others. Here are some of the most commonly used forms of the symbol used in jewelry: 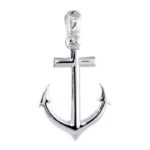 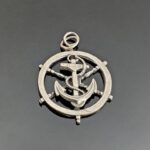 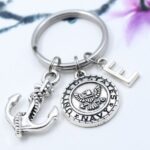 US Navy Keychain With Anchor Rope Cross by Kristina US Shop. See it here. 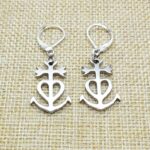 Where to Buy Mariner’s Cross Jewelry

If you’re having trouble finding mariner’s cross jewelry at your local brick and mortar jewelry store, you can always buy it online. We recommend the following online platforms: Amazon and Etsy.  Amazon, the largest online marketplace in the world, has a wide range of beautiful mariner’s cross jewelry at various prices while Etsy has an impressive collection of unique and attractive handmade pieces.

When shopping online for mariner’s cross jewelry, make sure to get all your questions answered by the retailer and check the product images carefully. It would also be a good idea to check the retailer’s policies and go through the customer reviews section to gauge the quality of the customer service and the product.

The Mariner’s Cross in Use Today

Although the mariner’s cross started out as a Christian symbol, it’s now used for various other purposes around the world. It’s a popular symbol for jewelry and it’s also used in heraldry, featured on the flags and the coats of arms of several countries including Sweden, Leon, Spain, Estonia and Tallinn.

The anchored cross is also worn as a talisman by many sailors and fishermen who believe that wearing that it will protect them from harm until they return safely to port.

Mariner’s cross jewelry remains an important symbol of hope, fresh starts and security by many people worldwide as well as to Catholics and Christians. While a large number of people who wear it are unaware of its origin and symbolism, it continues to be used in various ways.