Home » JEWELRY FASHION » What is the Dharma Wheel and Should I Wear It?

What is the Dharma Wheel and Should I Wear It?

Christianity has its cross. Judaism has the Star of David and Hinduism as well as Buddhism can be symbolised with the Dharma Wheel. Yet how did the Dharma wheel originate and what does it represent?

Although the Dharma Wheel, also known as the dharma chakra, is associated with Buddhism and Hinduism, it predates both these religions, with its original appearance in the Indus Valley civilisation. It may have symbolized the sun during this time.

In Hinduism, the association of the Dharma wheel with the sun was carried over through the Hindu deity, Surya, whose name is the Sanskrit word for “sun”. Surya is also seen in the god Mitra who is seen as the eye of the world, just as the Sun is considered to be watching over the earth. So, the Dharma wheel still finds an association with the sun, but the meaning behind the wheel extends to light and knowledge as one seeks the truth.

In Buddhism, the Dharma wheel is seen to represent enlightenment. It remains one of the most important Buddhist symbols.

We have already seen how the Dharma wheel was considered to represent the sun in both the Indus civilisation and Hinduism. Yet, the meaning behind the wheel evolved beyond this original understanding.

To fully grasp how the symbolism behind the Dharma wheel has changed we need to look at what dharma actually refers to. The word “dharma” comes from the stem “dhr” and means law, something that is fixed and immovable. It also means truth.

The Dharma Wheel in Hinduism

The Hindu god Vishnu is usually shown with the dharma wheel. Vishnu is considered to be the protector of humanity and therefore the dharma wheel is seen to represent Vishnu’s efforts in restoring and keeping order in the world. This concept of law and order is also extended to the religious practices a pious Hindu must follow.

The Dharma Wheel in Buddhism

Within Buddhism, the dharma wheel is considered to represent the teachings and morality of the Buddha. Again, we see the symbolism of law and order associated with the dharma.

The wheel can be seen to represent the Four Noble Truths of Buddhism, the Eightfold Path that needs to be followed to reach Enlightenment or the dependent origination in which all dharma is dependent on other dharma. In Buddhist art, the dharma wheel is often used to represent Buddha himself.

The Symbolism of The Dharma as A Wheel

Why is dharma represented as a wheel? And why are there depictions of the wheel with varying numbers of spokes within the wheel?

Being circular in shape, the wheel is seen to signify the perfection of the Buddha’s teachings. So, dharma as the law and rule of Buddhism is symbolised as a wheel.

Also, like a wheel, the dharma indicates the endless cycle of death and of rebirth we all experience and from which we can only break free through the teaching of the Buddha.

The components of the wheel are the spokes, rim and hub, which, though different in their makeup, all come together to create the wheel.

Together these three aspects work in harmony to create the whole Dharma Wheel and Number of Spokes

Within the Buddhist tradition, the dharma wheel is illustrated with a varying number of spokes, the most common number being eight spokes which symbolise the Eightfold Path of Buddhism.

The Motion of The Dharma Wheel

Just as a wheel rotates in a cycle, so too does the dharma and so the motion of the dharma wheel reflects the endless cycle of Samsara (death and rebirth).

The cyclic nature of the dharma wheel can also be used as an analogy of the fast spiritual transformation one undergoes when following the teachings of Buddha. It is said that Buddha’s first teaching set this wheel in motion and his subsequent teachings turned this wheel even further.

The dharma wheel makes for stylish and meaningful jewelry. It’s ideal in pendants, charms and earrings. Unlike many other religious symbol, the dharma wheel is more universal, in that it looks like the wheel of a cart or a ship’s wheel. In this respect, anyone can wear it as it transcends any religious meaning to encompass the general symbolism of a wheel. 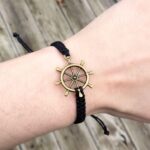 Dharma bracelet by The English Ivy. See it here.

For Buddhists or Hindus, wearing dharma wheel jewelry or clothing can be a way of reflecting your faith, much like Christians with the crucifix or the cross. However, some of the more puritanical Buddhists frown on the idea of displaying your belief in such a way as they claim it is egotistic and the ego is something that needs to be reduced within Buddhism.

Yet wearing items with the dharma wheel can be seen as a way of helping you attract good luck and positive energy while protecting you from negative energy. It is also a means of reminding you of the path to spiritual awakening.

Is A Ship’s Wheel A Reference to The Dharma?

If you look at older styles of ships you will see that the wheel has an uncanny resemblance to the eight-spoked dharma wheel. Does that mean that there is a hidden reference? That the captain of the ship was quietly calling upon the auspices of the Buddha to protect the ship and its crew from the dangers they may face on their voyage? Not really.

The traditional tattoo of sailors is that of the ship’s wheel and it is often misidentified as the dharma wheel. This is a reflection of the direction over which the captain has control, but not the power of the ship which is determined by nature. Nowadays, the nautical tattoo can be taken as a symbol of the direction, purpose and journey through life.

In some statues, you will see the Buddha with a hand signal in which the index finger and thumb are touching, making a circle. This hand gesture is also used by people who practice yoga or while meditating. The circle formed by the hand is an indication of the dharma wheel and it is believed that the Buddha used such a gesture in his first speech in Samath.

Evidence suggests that the dharma chakra first appeared in India during the Indus Valley Civilization, and then entered Indian culture through Hinduism and Buddhism. Though originally seen as a symbol of the sun which brings light and illumination into the world, the dharma wheel came to represent the law and order of the teachings of Hinduism, and more prominently, Buddhism.

As a fashion item, it is seen as a way of expressing one’s faith as well as using the dharma chakra as an auspicious amulet that attracts good fortune and protection. It’s beautiful design can also reference the wheel in general, including cartwheels and ships’ wheels.