Home » GEMSTONES » How Diamonds are Formed – Your ‘Not Too Technical’ Guide

How Diamonds are Formed – Your ‘Not Too Technical’ Guide

Diamonds have been a valued and highly sought-after gemstone since ancient times and have intrigued humans with their amazing properties. As the hardest mineral known to man, diamonds are one of the best stones to wear in jewelry and have numerous uses.

But where do these stones come from and how are they formed? What makes them come out of the ground and why are there diamonds in meteor crash sites?

Without getting too deep into the science of it all, let’s take a quick look at how diamonds are formed and what the different types of diamonds are based on their source and method of formation.

How Are Rough Diamonds Formed Within the Earth? 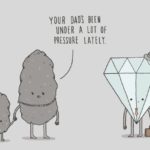 Diamonds require two main things to be created – high temperature and high pressure. The ideal temperature for the creation of a natural diamond is between 900 °C and 1300 °C (1650 °F – 2400 °F). In terms of pressure, diamonds need anywhere between 650,000 psi to 850,000 psi to form. There is a third component to this equation which is time. Time can vary, however, as a diamond can theoretically form in a matter of days or millions of years. 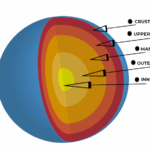 Both kinds of temperature and pressure are very rarely seen on the surface of the planet which is why most natural diamonds are usually formed deep beneath our feet – about 150 kilometers into the Earth’s mantle. Even down there the ideal conditions aren’t always met – the largest findings of diamonds occur beneath parts of continental crust called cratons. Cratons are the few stable parts of Earth’s continental crust that almost never move. The rest of the planet’s continental plates usually continue to move, overlapping each other, shifting continents and creating mountains. Instead, cratons are the parts that – for one reason or another – stand almost still. This provides stable conditions for the formation of diamonds.

How do diamonds travel all the way from the depths of the planet’s mantle into our mountains and mines? The most standard way is through “volcanic pipes”. These are certain deep-source volcanoes that usually reach three times deeper than most other volcanoes. Such deep-source volcanoes form what’s known as “kimberlite sites” where diamonds that have been transported and elevated from Earth’s mantle can be found and mined. Today, kimberlite pipes are the most important sources of diamonds and most diamonds come from these.

The Chemistry of a Diamond

We’re going to get a little technical here so bear with us. Most of us probably remember from school that diamonds and a pencil’s graphite are similar in their chemical components. That’s actually completely true – diamonds, graphite, and soot are all made from the same chemical element – carbon. 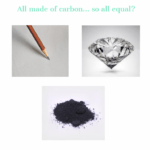 The difference is that while graphite and soot are made out of pure carbon atoms, in diamonds the carbon atoms are connected in covalent bonds to one another in groups of three atoms.

Such differences in the diamond’s arrangements of different chemicals are called allotropes. In diamonds, the covalent bonds of their carbon atoms create a three-dimensional network solid which is why diamonds are so tough. This is substantially different from the softer allotropes of graphite and soot which take very little to break or bend.

Not only are diamonds strong, their unique chemical makeup actually turns them into the hardest natural mineral on Earth. That’s why you can only cut and form diamonds using other diamonds (well, and with lasers). There isn’t any other material on the planet that can do as good a job at cutting as a diamond.

Naturally, Earth isn’t the only planet to have diamonds form in its mantle and crust. Other planets and planetary bodies form and have formed diamonds in the past so scientists aren’t surprised (at least not anymore) when we find diamonds in meteors that have fallen on Earth. At the end of the day, carbon is the fourth most abundant element in the universe and diamonds are one of its expressions, so to speak. 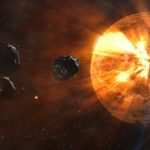 There is another type of diamond that is found in meteor crashes and these are the diamonds that are formed by the impact itself. As we mentioned, diamonds require two main things to form – high temperature and high pressure. Giant meteorites crashing into the Earth’s surface happen to create both.

The most famous case of a meteorite crash creating diamonds is the Popigai crater in Russia. The collision took place around 35 million years ago and the pressure of the impact turned a lot of the nearby metamorphic rocks and graphite into diamonds.

Just like lightning strikes turning sand into a kind of glass, diamonds formed this way aren’t of any jewelry value. They are, however, diamonds nonetheless and they can be used for various tools.

Synthetic Diamonds and How People Started to Create Them

The ancient people in India and Africa that found out about diamonds centuries before the Common Era weren’t able to reproduce the conditions used for the formation of these stones. Scientists in the 20th and the 21st century, however, are more than capable of doing so. As impressive as temperatures of 1300 °C and pressure of 850,000 psi are, nowadays they are very much achievable in controlled lab settings.

The first time people managed to create an artificial diamond was back in 1954 when General Electric managed to develop a process that was unimaginatively called High Pressure High Temperature (HPHT). While HPHT produced the desired effect, it was later determined as too time consuming and people started using another process called Chemical Vapor Deposition (CVD).

CVD uses a hydrocarbon gas mixture that’s placed to grow in a controlled environment. CVD can produce cost-effective diamonds on a commercial scale as the average time for the production of a synthetic diamond is 28 days.

Synthetic diamonds are typically priced at around 20%-40% less than natural diamonds of similar dimensions and qualities. The two types can be hard to tell apart when looked at with the naked eye, especially by a novice. When examined with equipment, however, there are some quite noticeable differences in the inclusions of synthetic diamonds. If you are worried that some jewelers might sell synthetics as natural diamonds, however, don’t worry – the grading report should indicate whether the diamond you’re looking at is natural or synthetic.

These days, there’s increasing interest in synthetic diamonds as an affordable, ethical and sustainable form of diamonds. They’re becoming increasingly popular in use for jewelry, especially in engagement rings.

Which Is The Best Type Of Diamond?

Naturally-formed mined diamonds are still the most popular type of diamond and is the most prevalent. Synthetic diamonds are identical in terms of quality and beauty, but are still relatively new in the market and there is some resistance to this type of diamond from certain sectors of the industry. However, if current trends continue, synthetic diamonds will take a larger share of the diamond market. Diamonds formed in meteor crashes are not nearly of a good enough quality and these aren’t typically used in jewelry.

Whether they are falling from the sky or erupting from the ground, diamonds have captured our imagination from the earliest times. They’re a valuable gemstone full of luxury and prestige and everyone wants them. Knowing how they’re formed deep within the earth adds an extra layer of awe to these beautiful gemstones.