One of the rarest and most valuable variety of the garnet family, demantoid garnet is a green gemstone known for its fire, brilliance and vivid green color. It makes an excellent addition to any jewelry collection and looks stunning in any type of jewelry.

Let’s take a look at everything you need to know about demantoid garnet before you buy.

What is Demantoid Garnet?

Demantoid garnet was first discovered in Russia in the mid-1800s in the famous Ural Mountains. Some other notable mines of the gemstone are in Namibia and Madagascar.

The beauty of the demantoid garnet lies in its vibrant, vivid green hues which comes from the presence of chromium. Some demantoids can exhibit a yellowish color, which is caused by traces of ferric iron.

Demantoid is a single-color gemstone, occurring only in green with some stones showing yellowish or brownish tinges. Vivid green demantoid garnets are the most sought after but paler stones often exhibit better fire.

In general, the best demantoid garnets are those that show neither under- nor over-saturation, but have an even hue, saturation and tone. Having said this, the color you choose depends on your personal taste. If you want a fiery, brilliant demantoid, it’s best to opt for a lighter hue while if you’re after a rich body tone, opt for a medium green, emerald-like color.

Demantoids are typically high in transparency but are known for generally having inclusions. Finding an inclusion free demantoid can be rare.

While inclusions tend to bring down the value of a gemstone, there’s one specific type of inclusion that is actually seen as an advantage in demantoids. These are known as horsetail inclusions and are found demantoid garnets that come from Russia. Horsetail inclusions are thin, radiating needle-like lines that spread out from a central point, resembling a horse’s tail.

When buying a demantoid garnet, always look at the actual gemstone and pay close attention to its inclusions as these can add to or detract from the beauty of the stone.

Demantoids are typically faceted as this brings out its exceptional brilliance and enhances the hue of the stone. Typical cuts include oval shapes, round, pear and cushion cuts. When cutting a demantoid rough, cutters aim to save as much of the rough as possible and often plan the cut according to the shape of the rough.

Most demantoid garnets are small and on average less than 1 carat in size. Finding stones over 1.5 to 2 carats is rare, and these can be quite valuable.

Demantoid garnets are excellent at energizing your wardrobe, bringing a burst of color to your look. Also, because of their value and rarity, they also add a touch of luxury.

For minimalist tastes, choose small stud earrings, pendants or stacking rings featuring demantoid garnets. These are tasteful and blend in well with your everyday look. 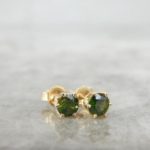 Demantoid garnets go well with white metals and create a modern look. The sharp contrast between the green and the silver-hues brings out the color of the gemstone clearly.

For a more vintage, classic look, choose yellow or rose gold metals. The blending of green with these metal colors creates an analogous color combination which looks seamless and relaxing.

Because garnet is the birthstone of January, demantoid garnets make good gifts for January babies. However, it makes better financial sense to choose a red garnet birthstone gift instead!

If you’re thinking about a demantoid garnet engagement ring, it’s important to note that the stone can easily get damaged as it’s not very hard or tough. The ring would need more maintenance than you might be prepared to give it. However, with appropriate care and a protective ring setting, a demantoid engagement ring could last a long time.

Demantoid garnet is typically never treated and there are no enhancements done to the gemstone, which means that the stones you find on the market are natural.

However, you may sometimes come across demantoid garnets that have been heat treated to enhance color.

There are also no synthetic versions of demantoid garnet.

However, sometimes inexpensive imitations such as green glass, can sometimes be passed off as demantoid. This is why it’s important to purchase from a trusted source to ensure that you aren’t being ripped off 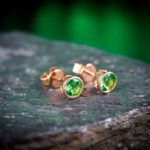 Both demantoid garnet and tsavorite garnet are quite similar in many ways:

However, regardless of these similarities, there are some dividing differences between the two stones:

Cleaning and Caring for Demantoid Garnet

To keep demantoid garnet jewelry clean, simply use warm water and a mild soap with a soft cloth or brush. Rinse thoroughly and dry the stone well prior to storage. It’s best not ot use an ultrasonic cleaner as this could cause damage to the stone.

Always store demantoid garnet in a fabric lined jewelry box or a soft pouch. This keeps it free from dust and from being scratched by harder items.

Never expose any gemstone, including demantoid garnets, to harsh chemicals or detergents. It’s best to take off demantoid garnet jewelry when swimming in chlorinated pools, cleaning with household detergents or engaging in vigorous activities like playing sports, gardening or hiking.

Meaning and Symbolism of Demantoid Garnet

Because demantoids are part of the garnet family, the symbolism attributed to garnets in general is relevant to demantoids as well. Garnets are a highly valued stone for those who believe in metaphysical properties of gemstones, with a history that goes back thousands of years. The healing properties attributed to garnets include protection, strength, communication and the ability to help with building relationships among friends, loved ones and acquaintances.

Demantoid garnets are believed to be a stone that removes obstacles arising in love. It’s the perfect gemstone for married couples to help couples overcome negativity and disagreements. It’s also believed to be a healing stone, helping with issues related to the immune system and alleviating breathing issues.

Demantoid garnets are also believed to alleviate loneliness and feelings of isolation.

Where to Buy Demantoid Garnet Jewelry

Demantoid garnets are very rare and your options will be limited when searching for the stone in brick and mortar stores. Taking your search online will give you access to more options as well as allow you to easily compare prices.

We recommend starting your search on Etsy, as there’s a range of unique, hard to find demantoid jewelry on offer ranging in price and style. You can also find genuine demantoid antiques that come with certification.

Always check for the authenticity of the stone and ask for a certificate if applicable. Make sure you’re purchasing from a trusted and reliable seller with good customer reviews, customer service, after sales policies and clear and open communication.

If you want to know more about garnets, check out our complete guide here.

How to Tell if Jade is Real – 5 Handy Tests