As Jewelry Shopping Guide  editors, we write about things that we love and we think you’ll like too. We often have affiliate partnerships, and may generate some revenue from these links at no cost to you.

Rubies have been coveted and prized for millennia but of all the ruby varieties, Burmese rubies stand supreme. These rubies, found in Burma (present day Myanmar) provide the cream of the crop of rubies, noted primarily for their color. They are the benchmark against which other rubies are evaluated. With ever increasing prices and rarity, getting your hands on Burmese rubies these days can increasingly difficult.

Let’s take a look at what Burmese rubies are and if they are really worth the hype.

Where Do Burmese Rubies Come From?

Burmese rubies come from Burma, a Southeast Asian country. Although Burma is now known as Myanmar, the industry still refers to these rubies as Burmese. Most Burmese rubies come from the districts surrounding Mogok and Mong Hsu, regions in the north and north-east of Burma respectively. These mines were famous for producing about 90 percent of all pigeon blood rubies.

The demand for Burmese rubies has existed for centuries. There are records of mining Burmese rubies that go back over 5 centuries. The most expensive ruby ever sold at an auction house, the Sunrise Ruby that fetched over 30 million US dollars in 2015, beating all previously held records.

What Color Is a Burmese Ruby?

What makes a Burmese ruby such a standout gemstone is its stunning color. There are a number of factors that affect the color of Burmese rubies but the two most prominent ones are the body color of the stone working with fluorescence and the inclusions in the stone. 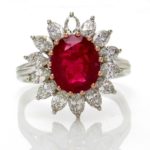 Most Burmese rubies have a bluish-red body color which gives the stones a saturated, vivid appearance. Couple this with the natural red fluorescence of the gemstone and these rubies obtain a rich, highly intense infusion of color.

The second main factor is the presence of miniscule inclusions that increase the dispersion of light across the surface of the gemstone. This gives a silky, soft touch to the color and increases its light performance.

Put all these factors together and you are left with a stone that is rich, dynamic and simply stunning in appearance.

As I mentioned above, most Pigeon’s Blood rubies came from Burma. This refers to vivid, beautifully saturated gemstones of a color reminiscent of the blood of pigeons that are among the most highly priced and the most sought after.

In fact, the most expensive ruby, auctioned for over 30 million US dollars, is a 25.59 carat Burmese ruby known as the Sunrise Ruby. It broke all previously held records for prices of colored gemstones.

Most rubies on the market, whether Burmese or otherwise, are heat treated directly at the mines. This makes it virtually impossible to find a ruby that hasn’t been heat treated to enhance color and clarity. This is a common practice and is not something to worry about. However, you may sometimes come across rubies that are untreated, and these typically command high prices. 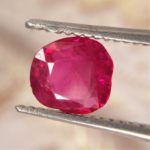 Beautiful Burmese ruby listed as having ‘no indication of heating’. See it here.

Sometimes, lower quality Burmese rubies may be fracture filled with glass, which brings down the value of the stone. These are not recommended, especially if you are after an investment piece. If you aren’t sure, always check with your retailer whether any treatments have been done on your Burmese ruby.

How Much Is a Burmese Ruby Worth?

Just because a ruby is from Burma does not automatically mean that it is of the highest quality and therefore should be more expensive. Each ruby is evaluated on a case by case basis with the focus on color, carat, clarity and other quality factors. To learn more about how to evaluate and buy a ruby, check out our complete ruby buying guide.

In general, though, Burmese rubies tend to be the most expensive among ruby varieties. The highest anyone has ever paid for a Burmese ruby has been $1 million USD per carat. However, in general, you can find high quality Burmese rubies priced around $10,000 per carat.

These famed mines in Burma are almost mined out, which makes Burmese rubies very rare. This keeps prices high and their demand always outweighs supply. 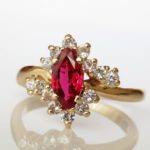 A stunning natural Burmese engagement ring. Better than diamonds? We think so! See it here.

Due to political reasons, the US imposed sanctions on Burma in the late 1990s, which blocked the export of rubies and other gemstones from Burma to USA and other countries.

The ban lasted for 8 years, during which time finding a natural Burmese ruby became very difficult. It was lifted in 2008 and Burma’s gemstones are now allowed to move freely to any country. 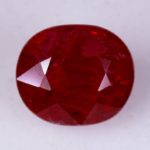 While the Burmese rubies remain unparalleled in its color and beauty, Mozambique rubies are now supplying over 30% of the world’s rubies.

The Mozambique mines are fairly recent, having only being discovered in 2011. Even so, the mines have already gained a reputation for high quality ruby with some even comparable to the famed pigeon bloods of Burma.

Mozambique rubies are known for their brilliant and vivid red hues and their high transparency. This makes these rubies more sought after and valuable than rubies mined from other African mines such as those mined in Tanzania, Nigeria, Malawi and Kenya. These generally tend to be darker or paler and more purple than the desired red.

In general, Mozambique rubies are often less expensive than Burmese ruby while holding their own in terms of appearance and beauty. As a result, they make an excellent alternative if you cannot find a suitable Burmese ruby within your budget.

Finding high quality rubies can be difficult, especially if you’re searching online. Always ensure that the retailer you choose has a proven track record and is known for their reliability and trustworthiness. Always ask about the origin of the stone, and check certification and the after sales policies.

It can be assumed that the rubies of Mozambique will be increasingly sought after as the ruby sources of Burma continue to decrease.

If you’re looking for high quality rubies, check out James Allen who has an excellent inventory of natural rubies.

We also recommend checking out Etsy for some unique and hard to find loose and mounted rubies.

Check out our quick review comparing these retailers and more here.

How to Tell if Jade is Real – 5 Handy Tests