Pearls are officially the oldest gemstone in the world and have been used for thousands of years for adornment. Along the way, this beautiful and unique gemstone has acquired various symbolism, one of which is that pearls are bad luck.

Some cultures, such as the ancient Japanese, believed that pearls were created from the tears of various mythical creatures, while according to early religious records, pearls came from the tears of Adam and Eve after they were cast out of the Garden of Eden. Perhaps the connection of pearls and tears may have risen from these ancient myths.

It is also said that you should never give pearls as a gift to anyone as they will bring tears and sadness to that person nor should you accept pearls as a gift. Unless you buy the pearls yourself, you will have extreme bad luck. 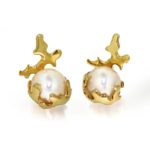 Who wouldn’t want these as a gift? See them here.

According to the superstition, if someone gifts you pearls, you should offer them money to purchase the pearls from them, as this will negate the bad luck and cancel it out. If you ‘buy’ the pearls from the person, rather than receive them as a gift, you will be able to counter the dire bad luck that comes with the stones.

Regardless of these superstitions, pearls have been popular wedding jewelry for many hundreds of years. To some, they represent purity, innocence, wisdom elegance and sophistication.

Interestingly, some brides choose to wear pearls on their wedding day to represent the tears she will shed, meaning that she will then have a tear-free, joyous married life. Taken this way, pearls can be seen as the perfect wedding day jewelry. 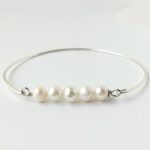 A pearl gift can also symbolize a tear-free marriage. See this here.

If we go back in history, we see that pearls carried various positive meanings for different cultures. Ancient Egyptians valued pearls to the extent that they were buried with them. The Chinese valued pearls as symbols of wisdom while in many European cultures, pearls were believed to provide protection to the wearer.

Should I Avoid Pearls?

Many gemstones have negative connotations associated with them and these are often due to some unfortunate event or bad press. For example, opals were widely considered bad luck after the publication of Anne of Geierstein, a book by Sir Walter Scott, in which the protagonist suffers bad luck, apparently from an opal that she owned.

This book is widely credited for destroying the European opal market for at least half a century as people began to avoid opals like the plague. 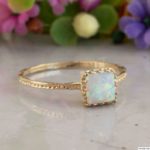 Opal jewelry, like this ring, were once considered bad luck.

It’s not wise to always believe what you hear. If wearing pearls on your wedding day can derail your relationship, then maybe there wasn’t much of a relationship to start with. If you’re superstitious and want to stay away from pearls, then do what works for you. However, there are as many positive superstitions (if not more) as there are negative, so you can choose to believe either side.

At the end of the day, what you feel about the gemstone is what matters. Personally, I wouldn’t worry at all about it. While pearls have some negative connotations, they also have been valued and coveted throughout history as a prestigious and highly valuable gemstone.

12 Black Pearl Necklaces to Wow You