Home » GEMSTONES » What is Rhodonite? – A Complete Buying Guide

What is Rhodonite? – A Complete Buying Guide

As Jewelry Shopping Guide  editors, we write about things that we love and we think you’ll like too. We often have affiliate partnerships, and may generate some revenue from these links at no cost to you.

Rhodonite is a beautiful gemstone with a unique color and is commonly used in various types of jewelry. It’s distinctive shades of pink are easily recognizable as there aren’t many other gemstones that look like it. Used in creating beautiful carved or faceted jewelry, rhodonite is a unique addition to any jewelry collection.

However, not many people have heard of this gemstone or know much about it. Whether you are an avid gemstone collector or someone looking for a new piece of jewelry to wear, rhodonite has something to offer you.

Let’s take a look at what you need to know before you purchase your own piece of rhodonite.

Rhodonite was first discovered in the late 1800s, in the Ural Mountains of Russia. It became a very popular gemstone in Russia and this popularity later spread to other parts of the world. Rhodonite has since been found in numerous other locations, including Finland, Australia, Japan, the USA, South Africa and Tanzania. However, rhodonite is not a common mineral and these natural supplies are not plentiful.

Rhodonite is a silicate of manganese with other minerals such as magnesium, iron and calcium in its composition. Most rhodonite contains black manganese oxide in the form of dendrite veins that form interesting patterns and matrixes on the stone, similar to turquoise. 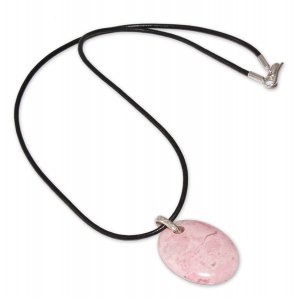 Ranging from light rosy pink to dark red, rhodonite stands out because of its eye-catching color. In fact, the stone has been named after its color as rhodon is the Greek word for ‘rose-colored’. Rhodonite can also be found in orange and fully black varieties, but it is the pink and red hues that are the most sought after.

Generally, in the gemstone world, inclusions can heavily reduce the value of the gemstone. Not so in the case of rhodonite. The dendritic moss-like inclusions, made of manganese oxide, found in rhodonite create beautiful patterns and contrasts with the main hue of the stone. These inclusions add to rhodonite’s intriguing appeal. 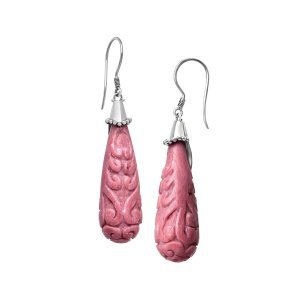 Rhodonite is often cut into cabochons, tumbled stones and beads, while some are carved into beautiful designs, patterns and figurines. Large rhodonite specimens are sometimes sold directly to gemstone collectors after they have been shaped and polished.

High quality transparent rhodonite is often faceted to maximize its luster and reflection of light, and may be cut into common gemstone shapes such as pear, oval, trilliant, marquise and emerald.

However, rhodonite remains one of the hardest gemstones to cut due the cleavage and crystal structure of the stone, and requires skill and expertise from the cutter.

Rhodonite is not known to be enhanced or treated in any way.  No known synthetic versions of rhodonite exists. Any rhodonite you buy is likely to be natural and unenhanced.

Even though rhodonite is very rare, it is quite an affordable gemstone and can be found to suit most budgets. However, g a high quality, transparent, eye-clean stone will come at a much higher price.

Rhodonite has always been a popular material for jewelry designers, partly due to its beautiful hue and affordability. Rhodonite easily adapts to formal or casual styles, depending on its setting, and suits almost all skin tones.

Here are some things to consider when choosing rhodonite jewelry.

Because of its beautiful color, rhodonite pairs well with almost all metal colors. When matched with silver, rhodonite has a modern and unique touch. Pair with yellow gold, brass or bronze for a striking ethnic look. 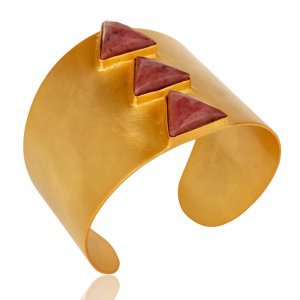 Rhodonite with rose gold is an interesting and attractive combination. The rose gold tends to highlight the pink hue of the stone and enhances its color.

Pairing with Other Gemstones

Rhodonite pairs well with other gemstones due to its neutral color. Often, rhodonite beads are combined with gemstones such as aventurine, labradorite or amazonite for a beautiful, bohemian look. It’s best to pair rhodonite with other gemstones of similar opacity especially in bead necklaces or bracelets, as this gives a harmonious appearance. 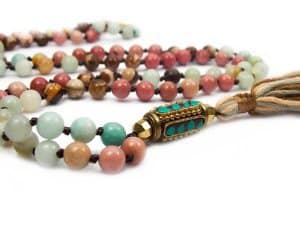 One of the allures of rhodonite is that it suits a range of jewelry styles. Whether it is a sophisticated, elegant look that you are after, ethnic, hippie, bohemian, casual or basic, rhodonite can suit every occasion.

Although it is easy to assume that rhodonite is a stone for women due to its feminine color, in fact, many men’s items have been made from this beautiful stone too. In this way, it is also a gender-neutral gemstone.

Rhodonite goes well with most types of jewelry. It is particularly attractive when made into larger statement pieces.

Choose a rhodonite statement necklace for a stunning eye-catching look, for a formal party or event. The intriguing earthy colors of the stone will suit most types of outfits, but will be especially attractive with neutral colors, such as a black or navy cocktail dress. A large rhodonite cocktail ring brings attention to your hands while remaining classy and subtle in color. This dressy addition again suits any formal event or occasion. 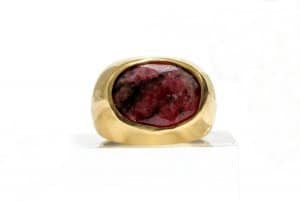 Rhodonite dangle earrings are a beautiful addition to your jewelry collection, and add a touch of class and sophistication. A simple well designed piece can be a jewelry staple. 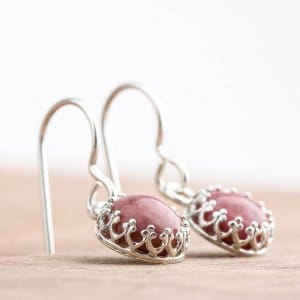 Rhodonite has been an important gemstone in crystal healing. It is highly valued as a stone that can assist in healing emotional issues and providing mental clarity. When worn, it is believed that rhodonite assists in calming the mind and bringing peace and clarity to the wearer.

Rhodonite is also believed to assist with physical disorders of the skin, such as rashes and scars. It is also thought to bring back energy to someone suffering from trauma.

Rhodonite is a fairly soft stone, ranking at 5.5 to 6.5 on the Mohs scale. Rhodonite is easily scratched by objects harder than it, even by dust. Due to the stone’s cleavage, it is susceptible to breakage. This is why it is important to protect rhodonite jewelry from knocks and bumps, especially during strenuous activities. This applies especially to rhodonite rings which will likely be more exposed than earrings or pendants. Generally, opaque rhodonite is considered tougher and harder than transparent rhodonite.

When cleaning rhodonite, avoid using ultrasonic or steam cleaners as these can cause the stone to fracture. Instead, wash with warm soapy water and a soft cloth. Once washed, rinse thoroughly and dry. Don’t store rhodonite jewelry with other items, as it can be scratched by these. Instead, place within a fabric-lined box or soft pouch separately.

Rhodonite does not respond to heat well so keep it away from heat sources.

Always take off your rhodonite jewelry when taking part in physical activities, or when exposed to chemicals such as household detergents, make up, body lotions, hairsprays and perfume.

Where Can I Buy Rhodonite?

It is best to take your rhodonite search online, as most brick-and-mortar stores will not have rhodonite jewelry in stock.

Many beautiful rhodonite jewelry pieces can be found on artisan stores such as Etsy and Novica. Always ensure that the retailer is reputable and communicates with you effectively and honestly about their jewelry.

Don’t forget to check Amazon which has a very good selection of rhodonite jewelry.

What are Blood (Conflict) Diamonds and How to Avoid Them?

What is Marcasite Jewelry? – A Quick Guide