We believe the most romantic engagement ring style is the moi et toi ring style as it focuses on the two most important parties of the engagement – the couple.

Moi et toi (meaning me and you) is an excellent choice if you want an engagement ring that is not only beautiful but also meaningful.

Here’s what the moi et toi ring style is all about.

What is the Moi et Toi Engagement Ring Style?

When looking for an engagement ring, most people choose a meaningful ring design that says something about their relationship or their personality. For example, three stone rings represent the present, past and future of a relationship while gemstone engagement rings carry a lot of symbolism based on the gemstone’s meaning. The moi et toi style focuses on the couple. 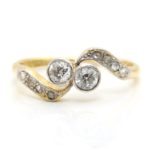 While most engagement rings focus on a single gemstone, placed in the center to take the focus of the design, moi et toi highlights two gemstones.

Generally, these gemstones are of equal size and are placed adjacent to each other. Often other motifs are included in the ring design, including floral motifs such as flowers, vines and leaves. Other embellishments such as filigree work, milgrain and accent stones add to the beauty of the design.

Moi et toi is a highly versatile ring style and allows designers to get creative and customise the ring to suit the couple.

While we don’t know when exactly moi et toi rings were first crafted, we do know of the famous moi et toi ring that Napolean Bonaparte gifted to his first wife in 1796. We tend to think of Napoleon as a great emperor, but he was also known for his romance. 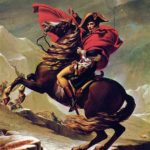 Napoleon Bonaparte’s moi et toi ring is the most famous of this style.

The woman he was in love with, Josephine de Beauharnais, was older than him and had two children from a previous marriage. In terms of the social norms of the time, she was wrong for him and naturally, his family opposed this union.

However, Napolean and Josephine were in love and ignored the obstacles in their way. They married and went on to become the rulers of France… as you do. Moi et toi rings have since then come to symbolize romance, passion and steadfast love.

And the ring that he gifted her? 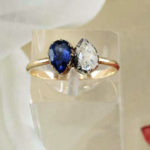 The Ring Gifted by Napoleon

The stunning diamond and blue sapphire ring was auctioned for $949,000 in 2013 and was bought by an anonymous bidder.

Remember that at the time of buying this ring, Napoleon was only 26 years old, an up and coming officer and did not have much money. Yet he must have broken the bank to purchase this high-quality ring for the woman of his dreams – the woman who later became his queen.

Now if that isn’t romantic, we don’t know what is.

The moi et toi has been around at least since 1796 as far as we know, making it one of the oldest ring styles.

There are many authentic moi et toi antique rings available but as this is a ring style that’s been increasing in popularity, you’ll notice that there are many modern designs on the market as well.

When choosing a moi et toi consider the following factors:

Your choice can also be guided by the symbolism of the gemstone which adds meaning to the design (more on this below). 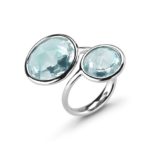 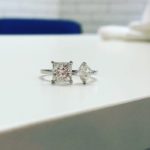 We’ve already mentioned the significance of moi et toi but as I mentioned above, this can be accentuated by the design elements of the ring:

By pairing these elements together to work harmoniously in your overall ring design, you can have the meaning of your moi et toi ring elevated. What’s more, no one else needs to know or understand what the ring means.

If you’ve fallen in love with the idea of a moi et toi ring, you might want to start searching to see what options you have. The best way to get exactly what you want is to custom design your engagement ring. Custom designing doesn’t necessarily have to be more expensive than an off-the-shelf ring.

To get an idea about the designs available and what’s possible with the moi et toi ring style, we suggest taking your search to Etsy which offers an impressive selection of moi et toi rings. You can browse these here.

Emerald Cut Diamond – Everything You Need to Know